Sonic Illustrations was technically born around 2013. Back then I started a little experiment in my bedroom which also served as my workshop. I used the bass reflex speaker of my computer setup, put some clingwrap over it, poured some ecoline on the top of it, put some paper on top and played some audio through the speaker. The results were basically paintings created by the soundwaves of the audio. By the vibrations of the bass reflex speaker, the ecoline splattered onto the paper creating these (in my opinion) beautiful circular illustrations. I'd always wanted to re-create this experiment but with a bit more of a professional and permanent setup. Thus, almost eight years later, Sonic Illustrations was born.

In the pictures below you can see the setup I used back in 2013. It was definitely experimental but it did create these three beautiful illustrations. 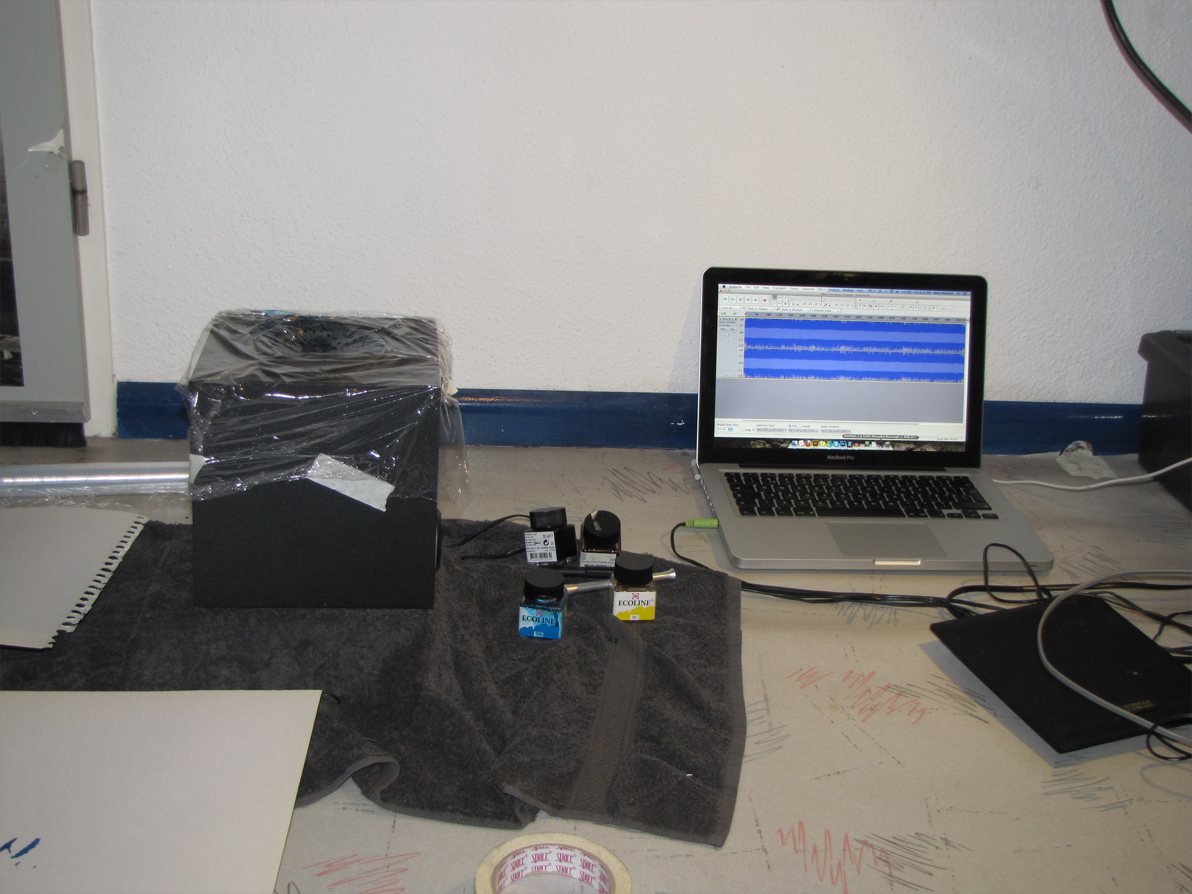 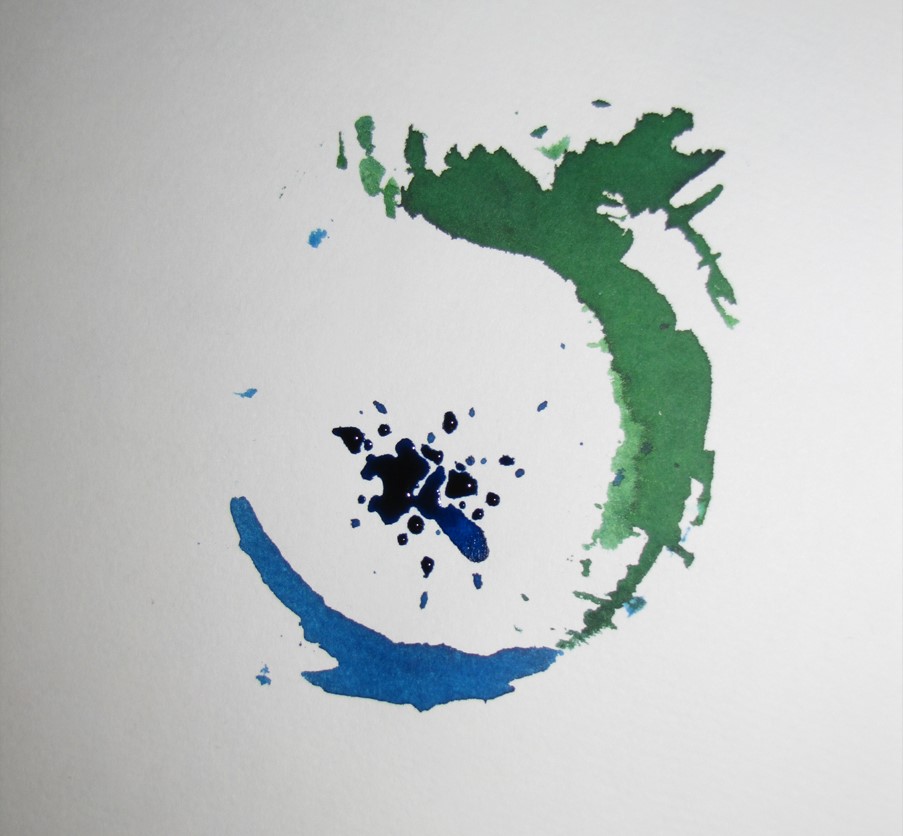 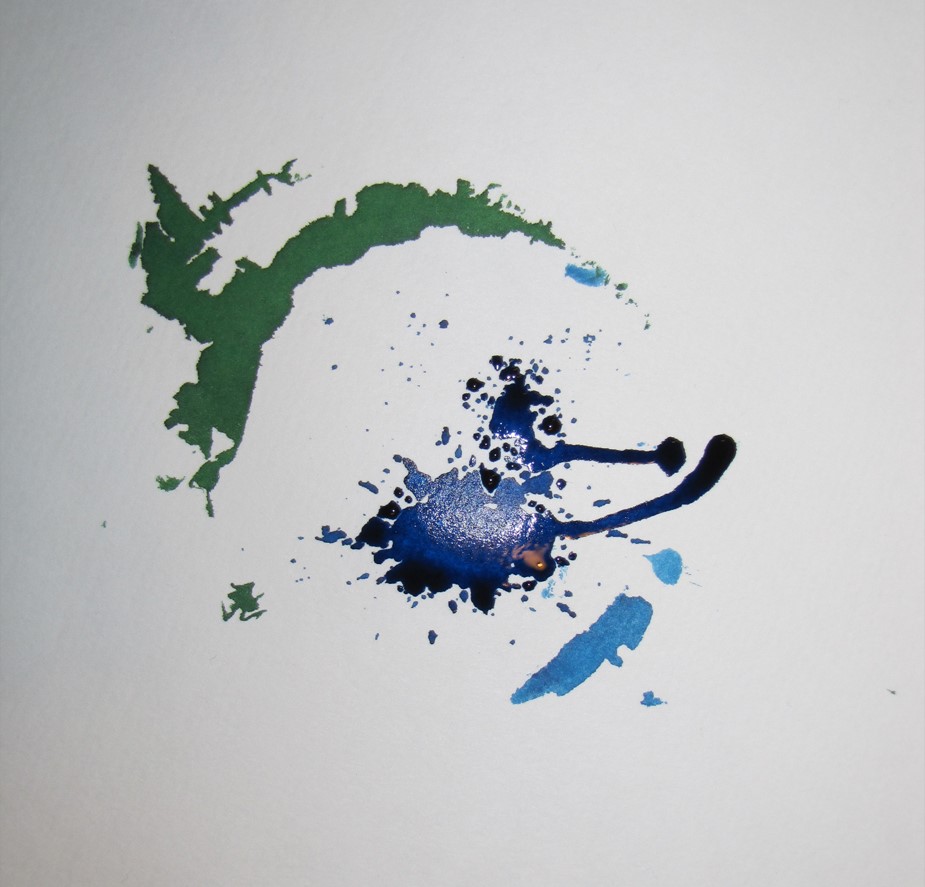 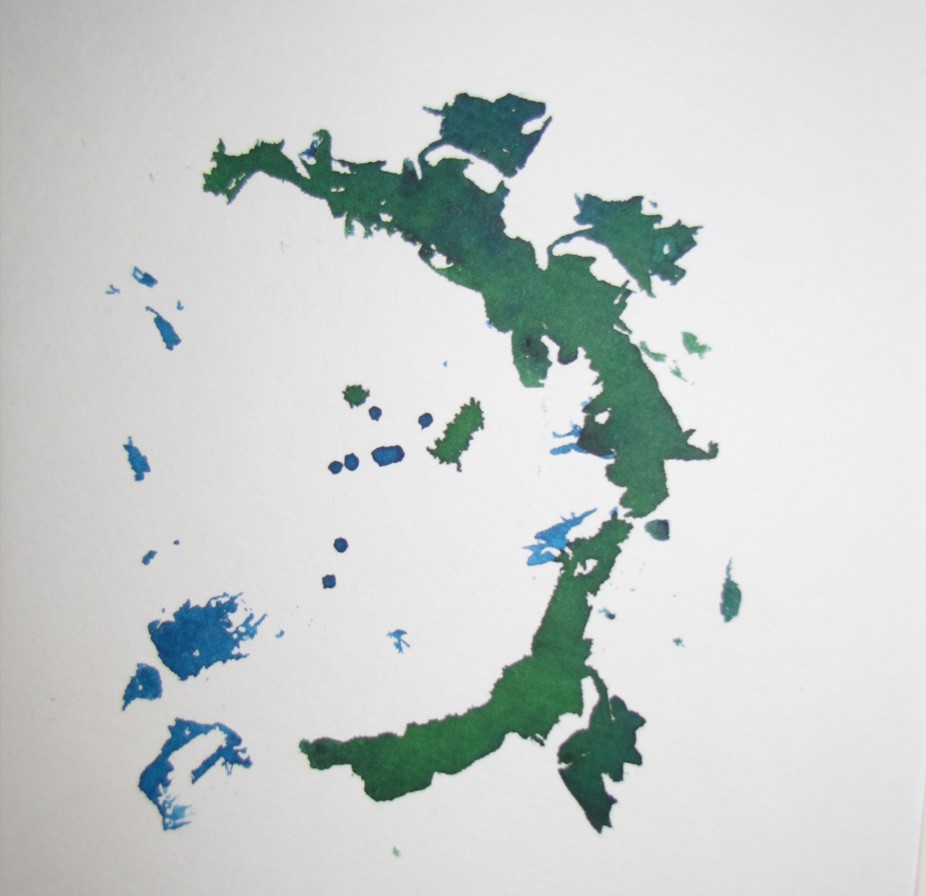 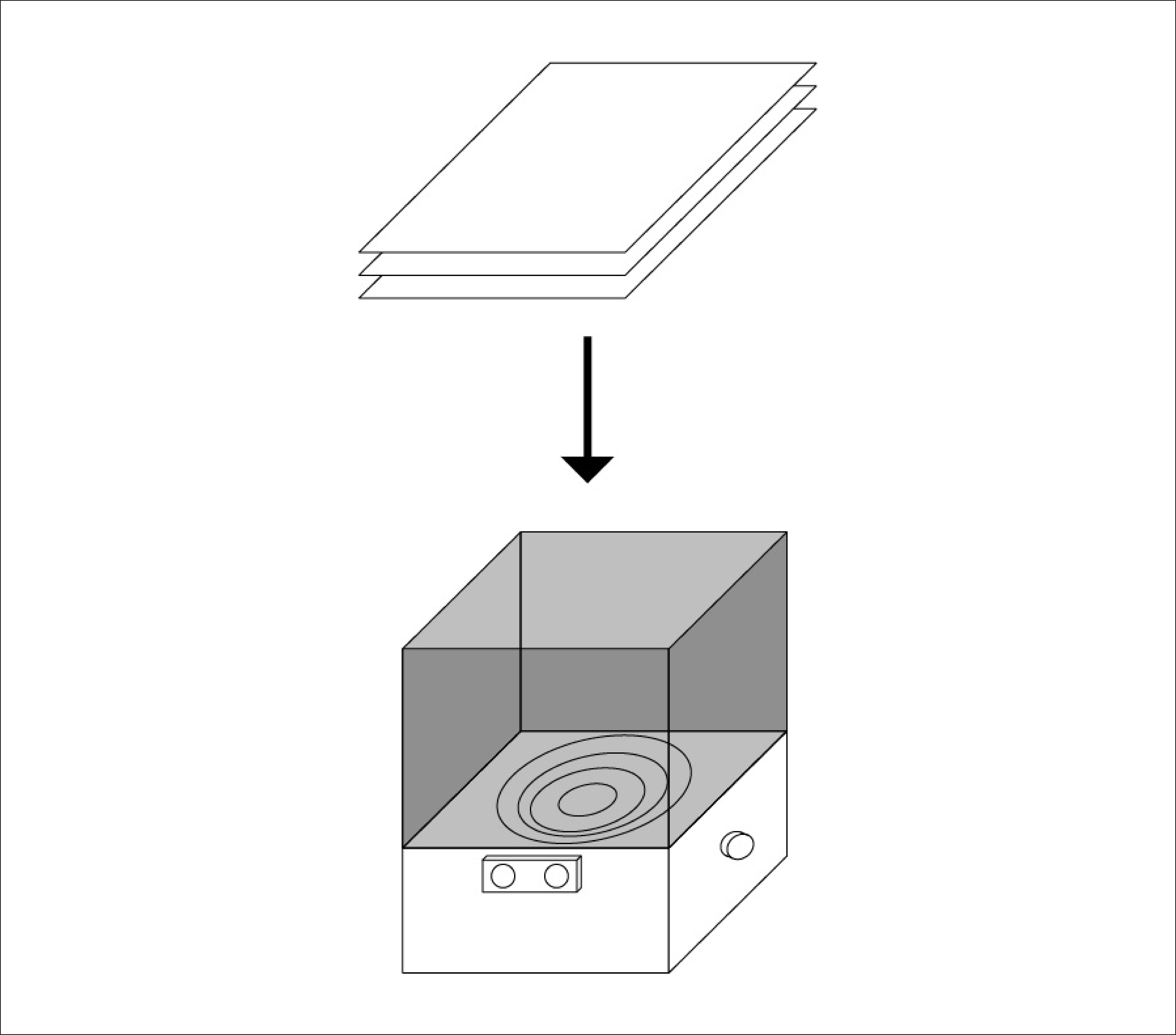 The first thing I did was draw out a sketch for the setup that I had in mind for my permanent Sonic Illustrations setup. It would become an interactive installation with which you can create paintings through sonic vibrations. Some parts ended up being changed slightly but this would be the basic idea which I would eventually create. 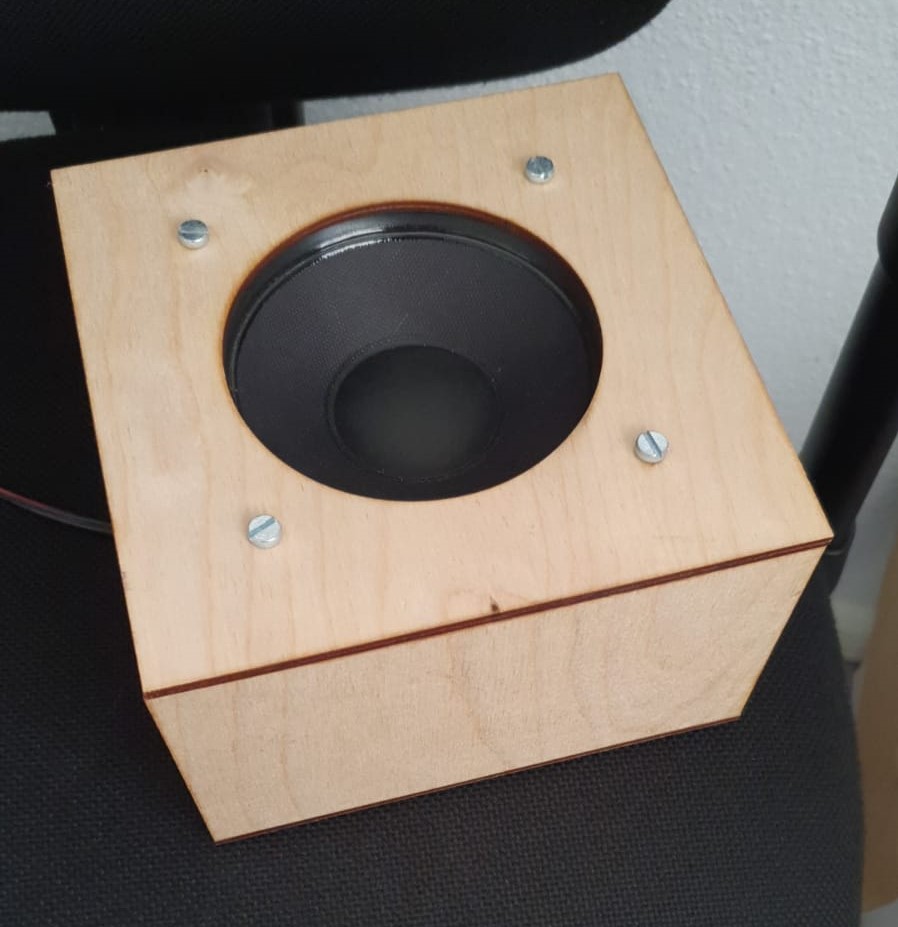 I then started building the base for the speaker. This housing is where all the other parts would live inside of as well. I used a lasercutter to cut the different parts for the box out of the Triplex wood. You can see the Illustrator drawing I used below. (It's pretty basic, I know but at least it has the correct dimensions.) 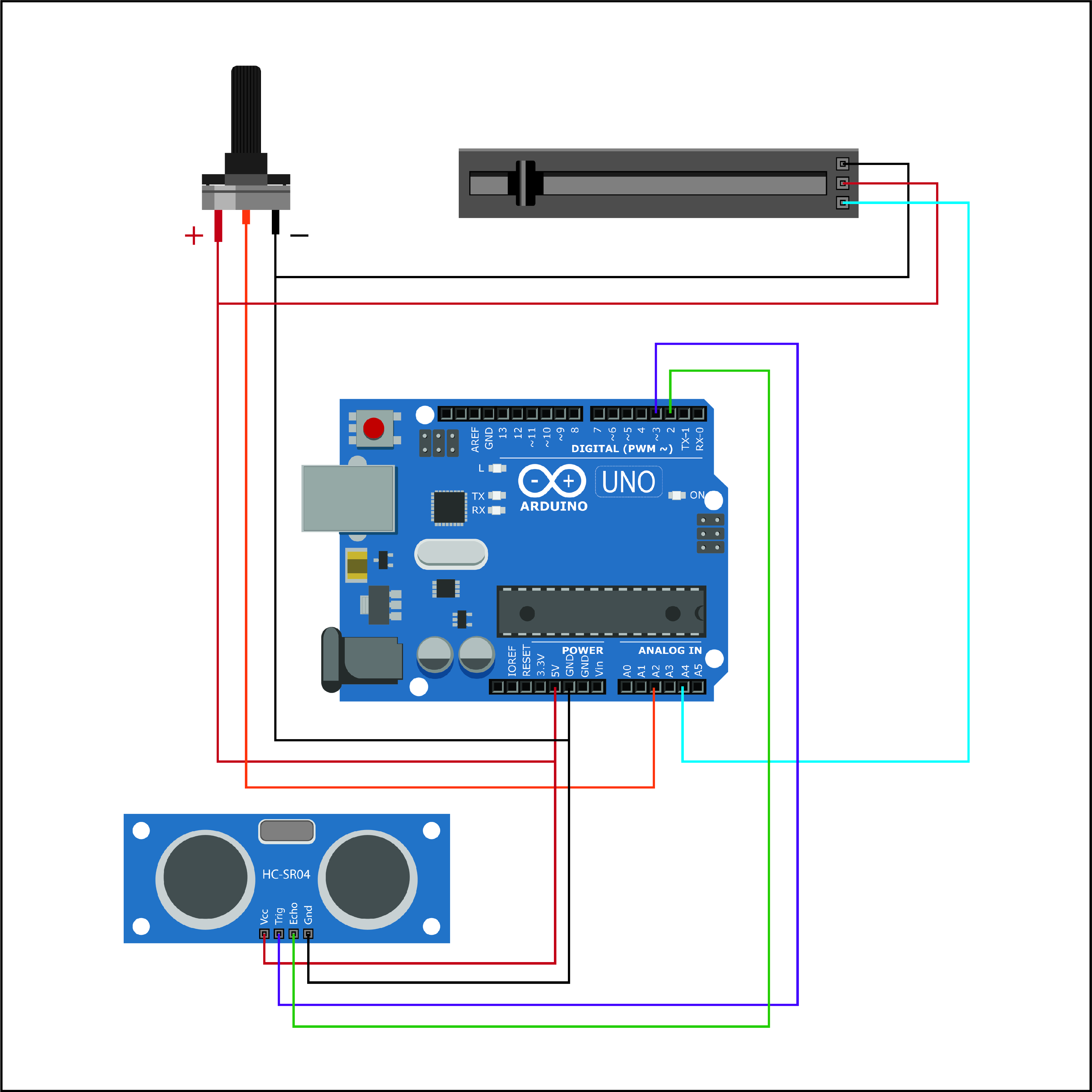 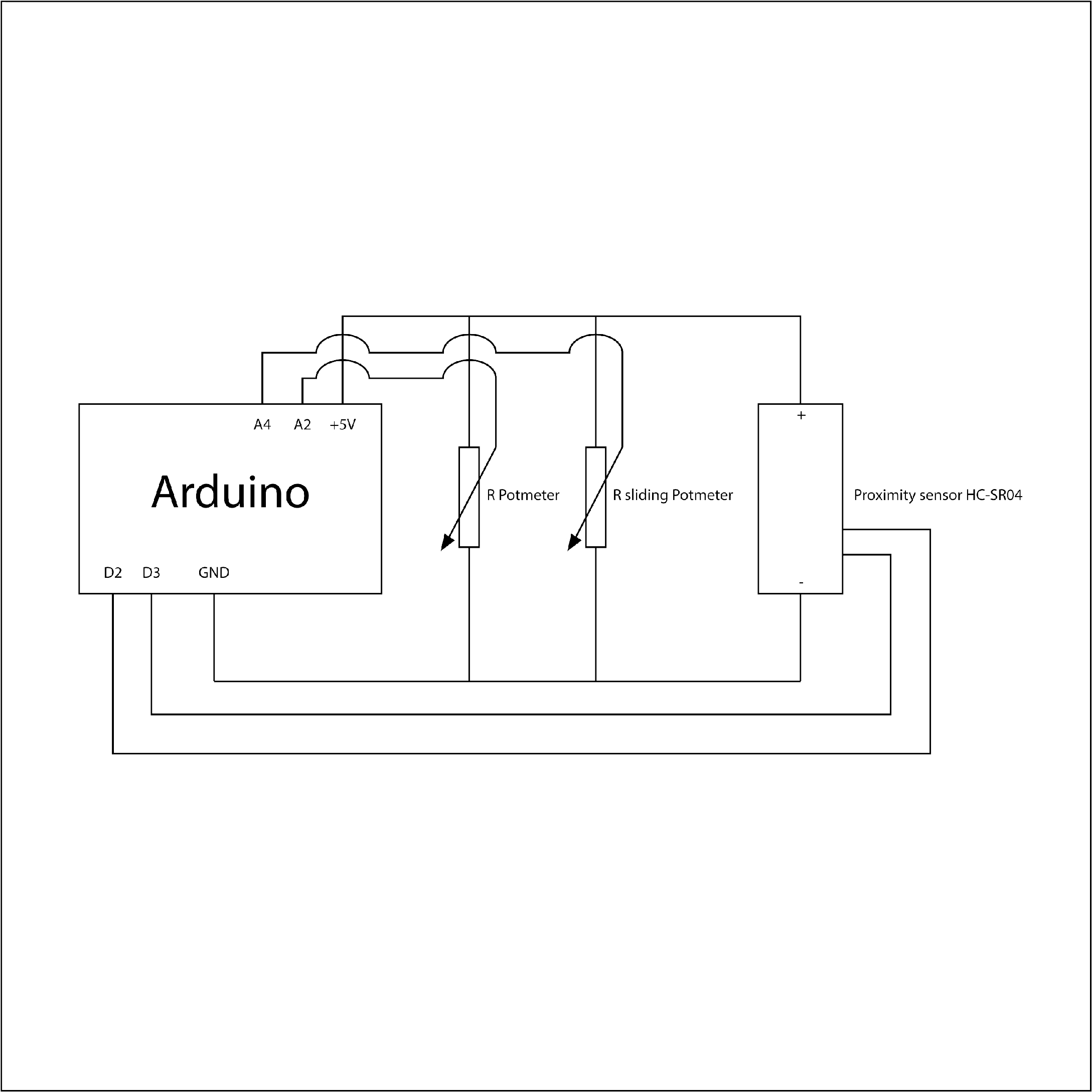 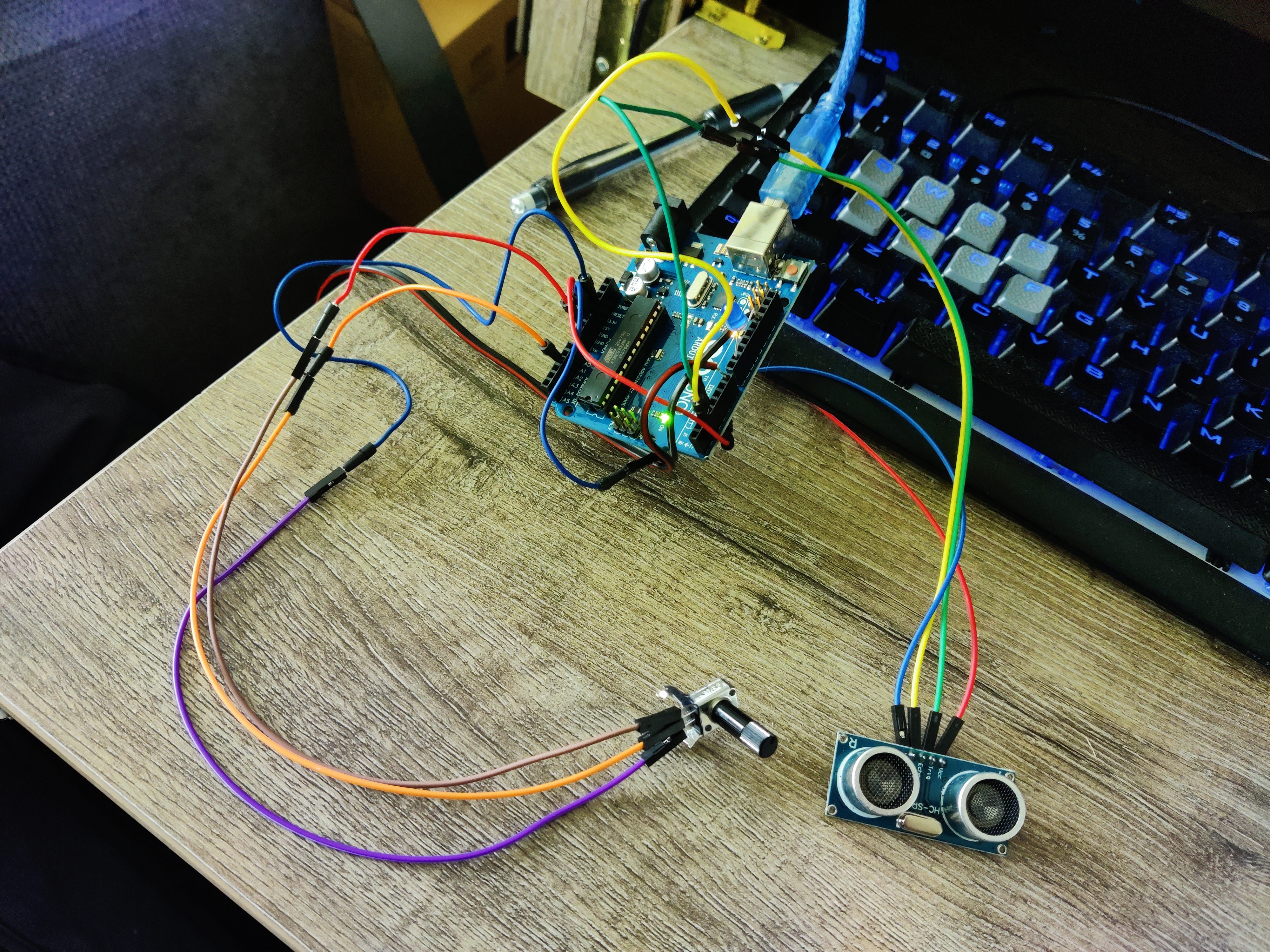 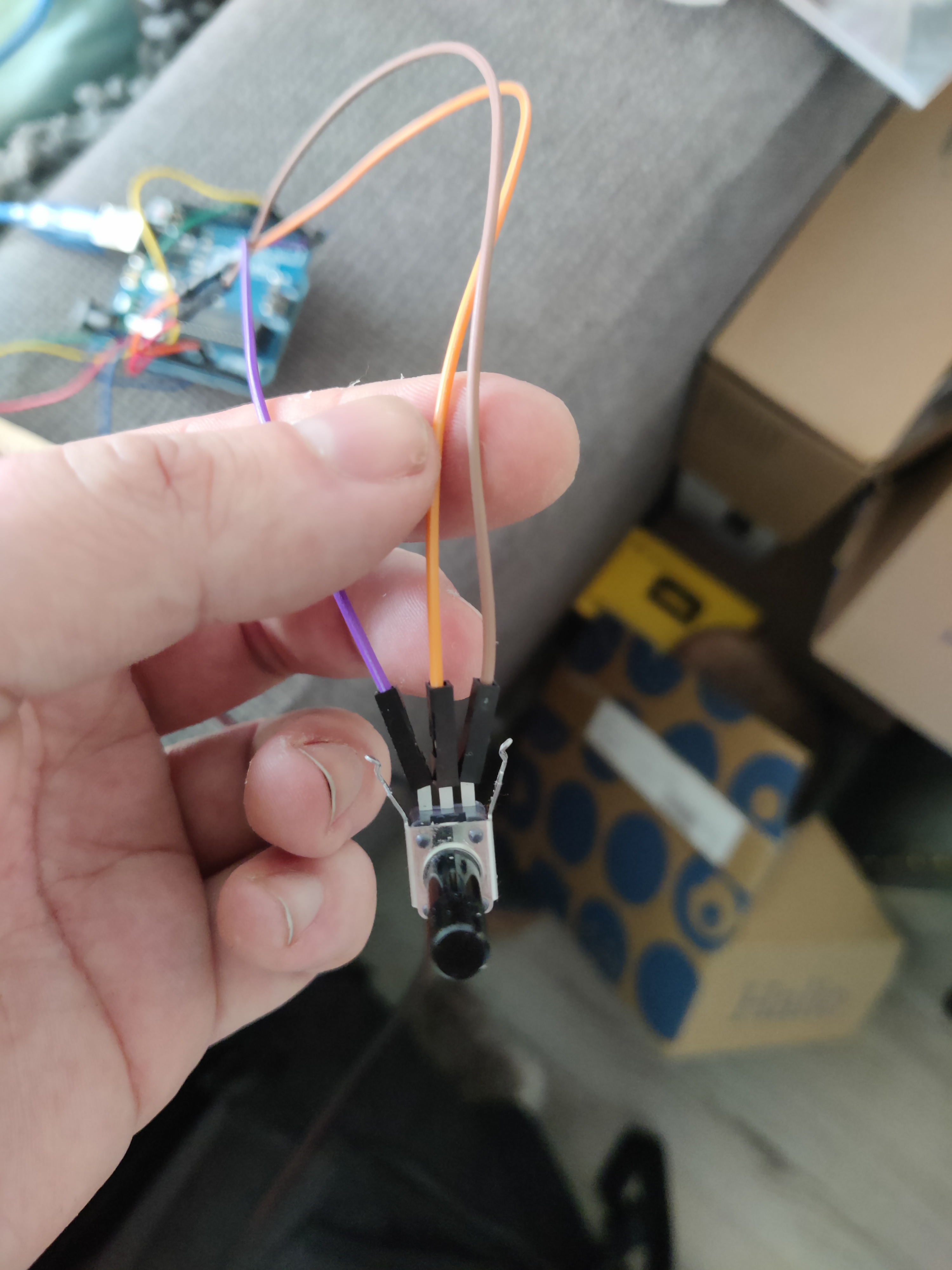 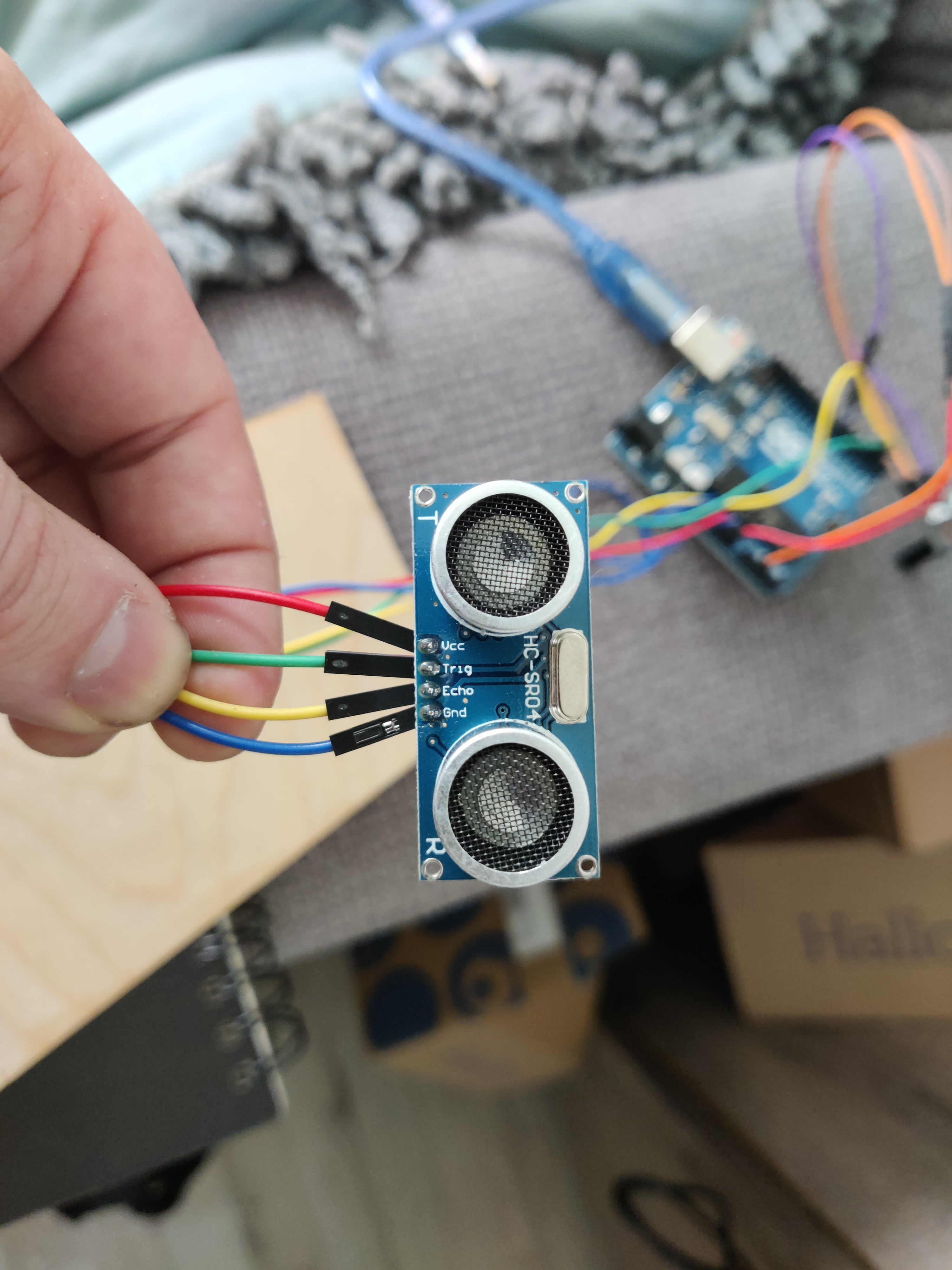 In the next two images you can see both the code from the Arduino IDE as well as the Processing IDE. The Arduino code reads the values from both potentiometers and the proximity sensors and then sends those values to the Serial monitor so that Processing can pick them up. The Processing code then takes these values and uses them to create and alter the waveforms with the Minim Processing library. The potentiometer randomizes the frequency of the waveforms, the siding potentiometer selects a different oscillator (sawWave, sineWave, squareWave and triangleWave) and the proximity sensor determines the frequency of the waveforms. 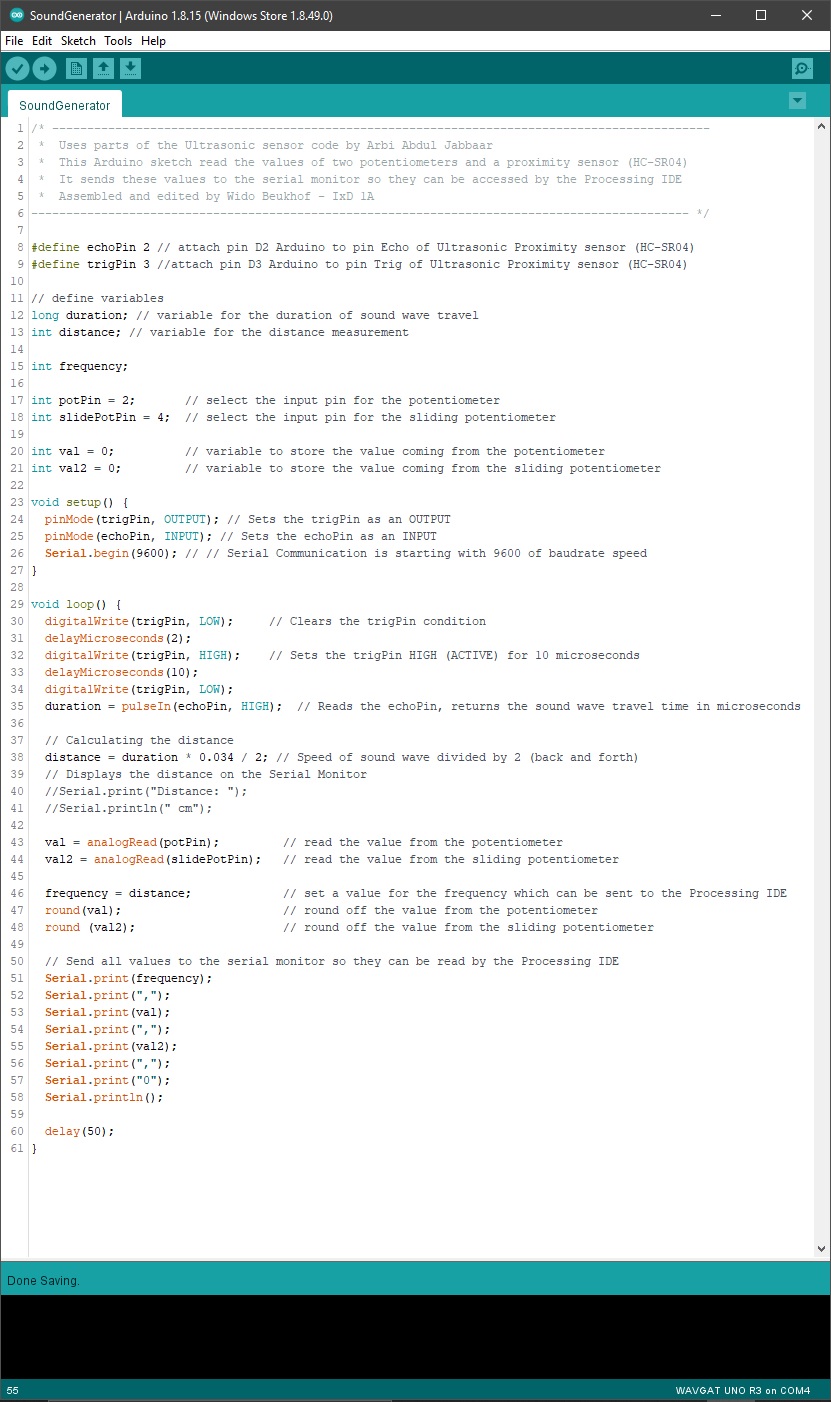 I used this little handheld die grinder to cut out holes in the wooden box through which the sensors could fit. Each sensor would have it's own spot to live in. The biggest challenge here was definitely the sliding potentiometer which turned out a little less neat than the others. 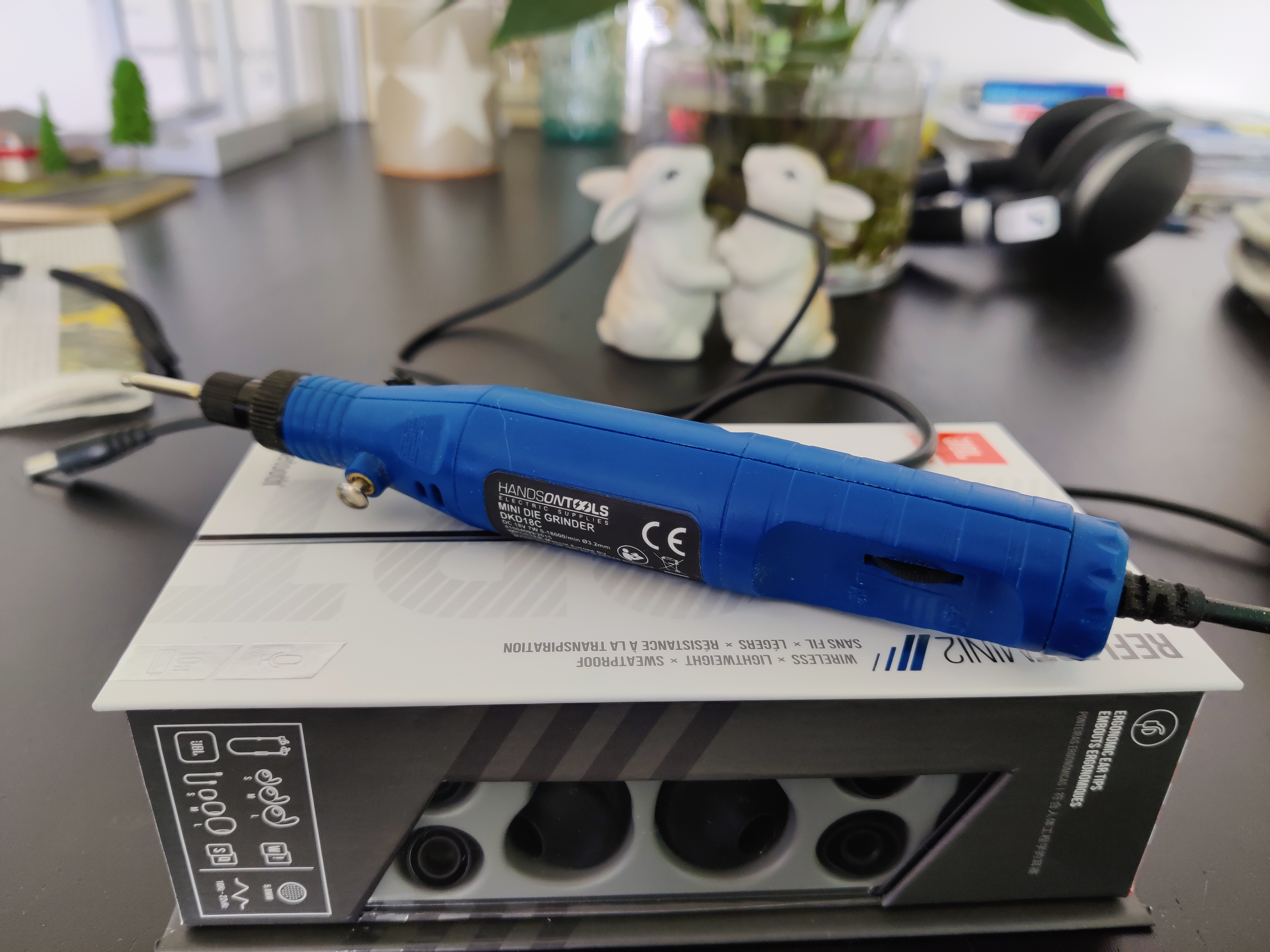 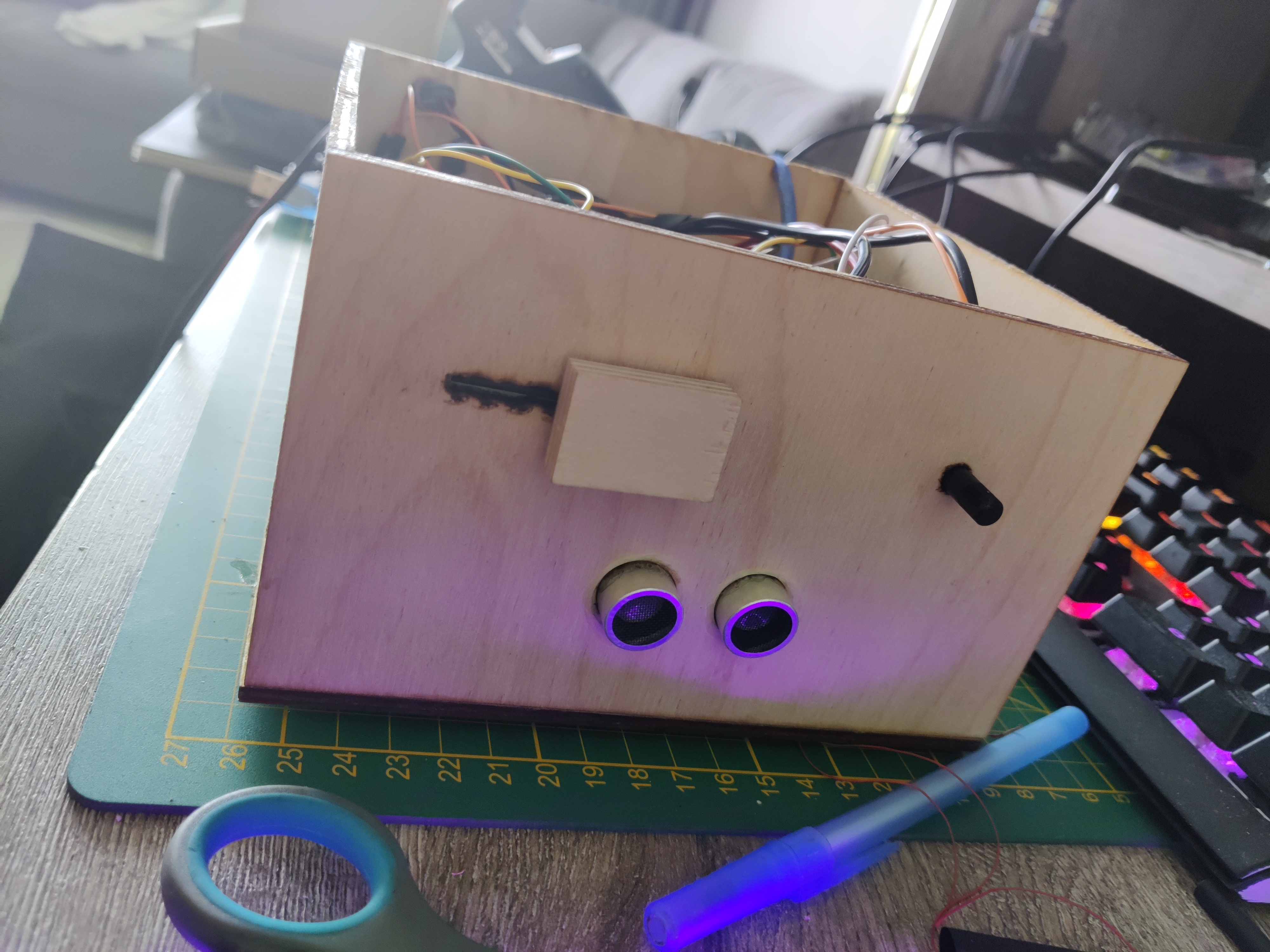 Now that all of the sensors had a little place to live in, it was time to solder all the necessary wiring and place the components inside the box, including the Arduino. The cable management could have been better for sure but the giant speaker in the middle made it a little bit of a challenge to get everything to fit inside. However, it did fit and everything was now in place for the machine to work. 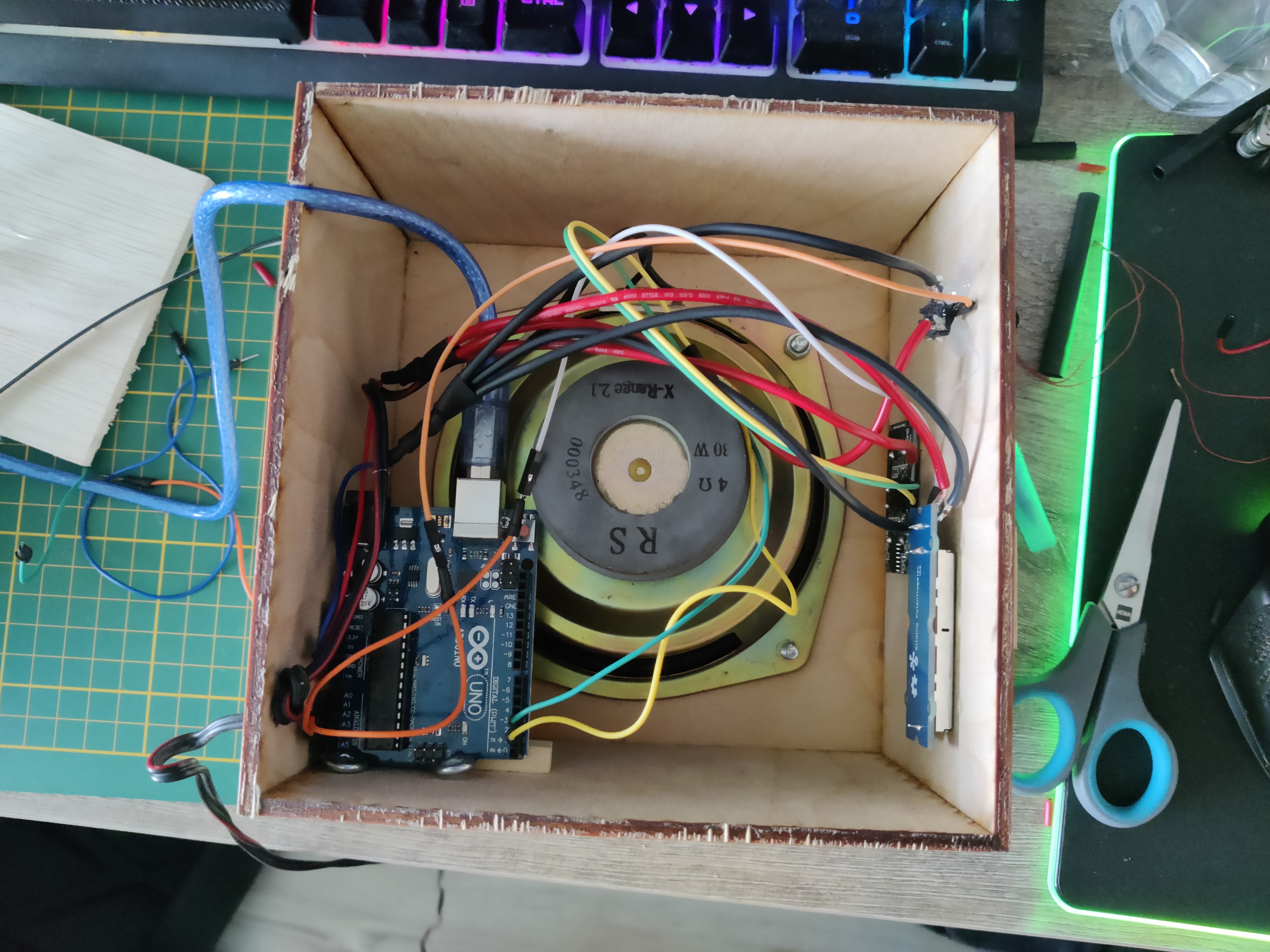 So the machine is now basically done. All the electronic components work, the code for both the Arduino IDE and the Processing IDE works, the machine is properly closed up for a nice and clean look. All that's left now is to test it out! Well, this is where a new issue showed up. 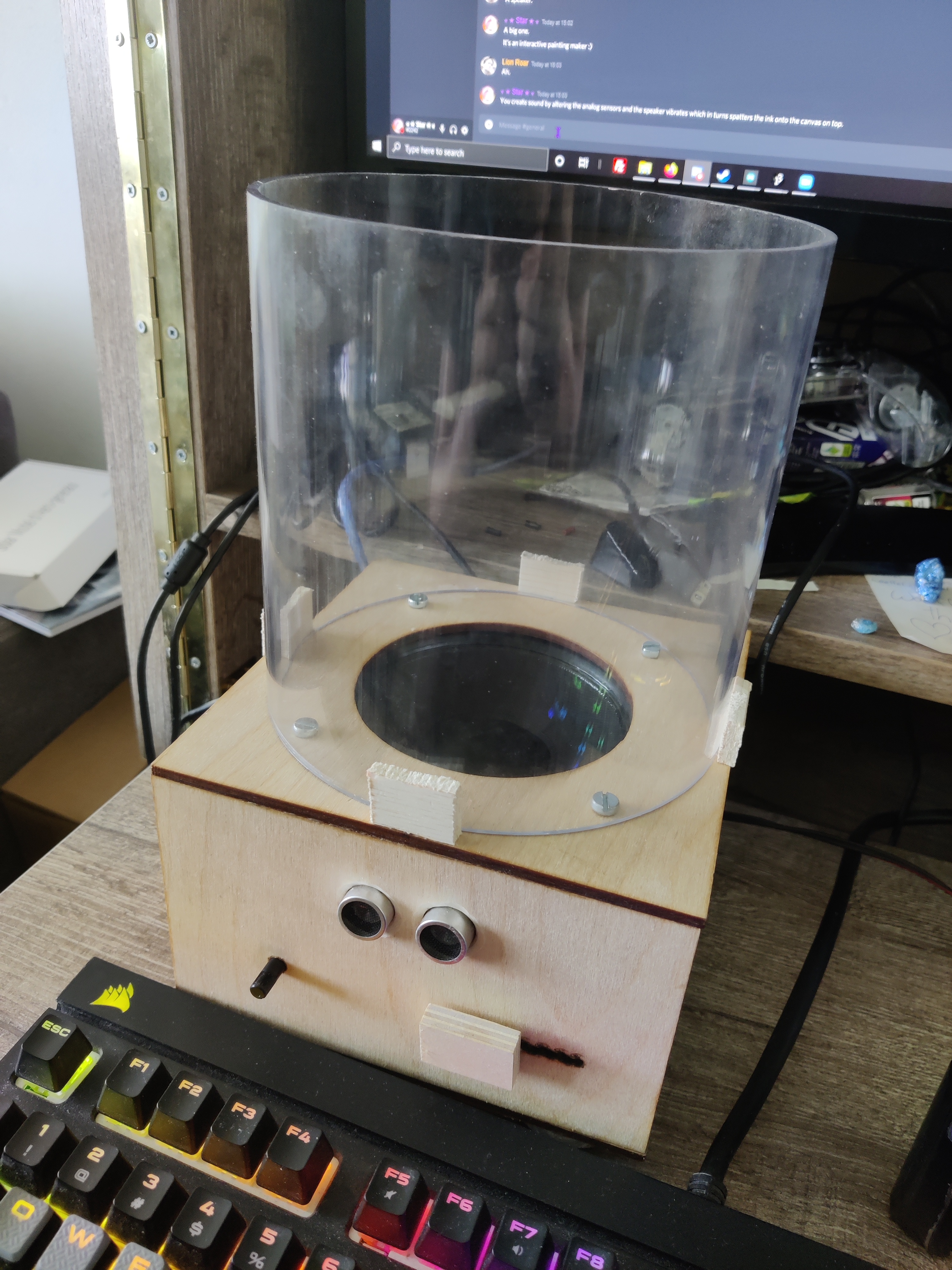 The first test of the completed setup actually went pretty well. With some clingwrap over the speaker so that the ecoline doesn't destroy the speaker, the ecoline splattered upwards nicely due to the heavy vibrations of the speaker. I used a small amplifier to get some more volume out of the speaker. However, as it turns out, the clear plastic tube I have on top of the machine was a little bit too high. The ecoline doesn't reach high enough to actually hit the canvas on top of the tube. So, it was time for some alterations. 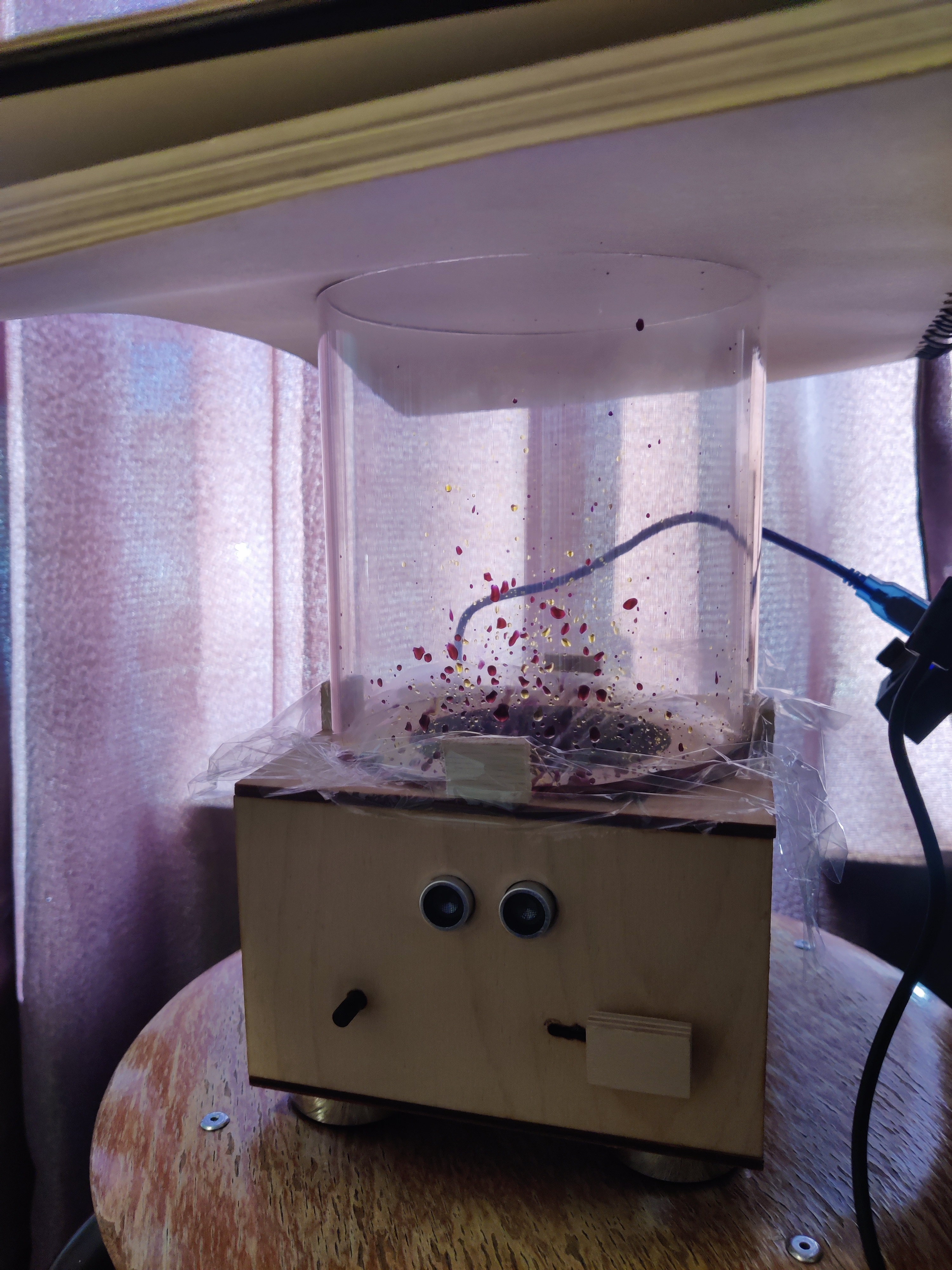 I used a little handsaw and some tape to saw the tube in half, this should fix the issue with the ecoline not being able to reach the canvas. 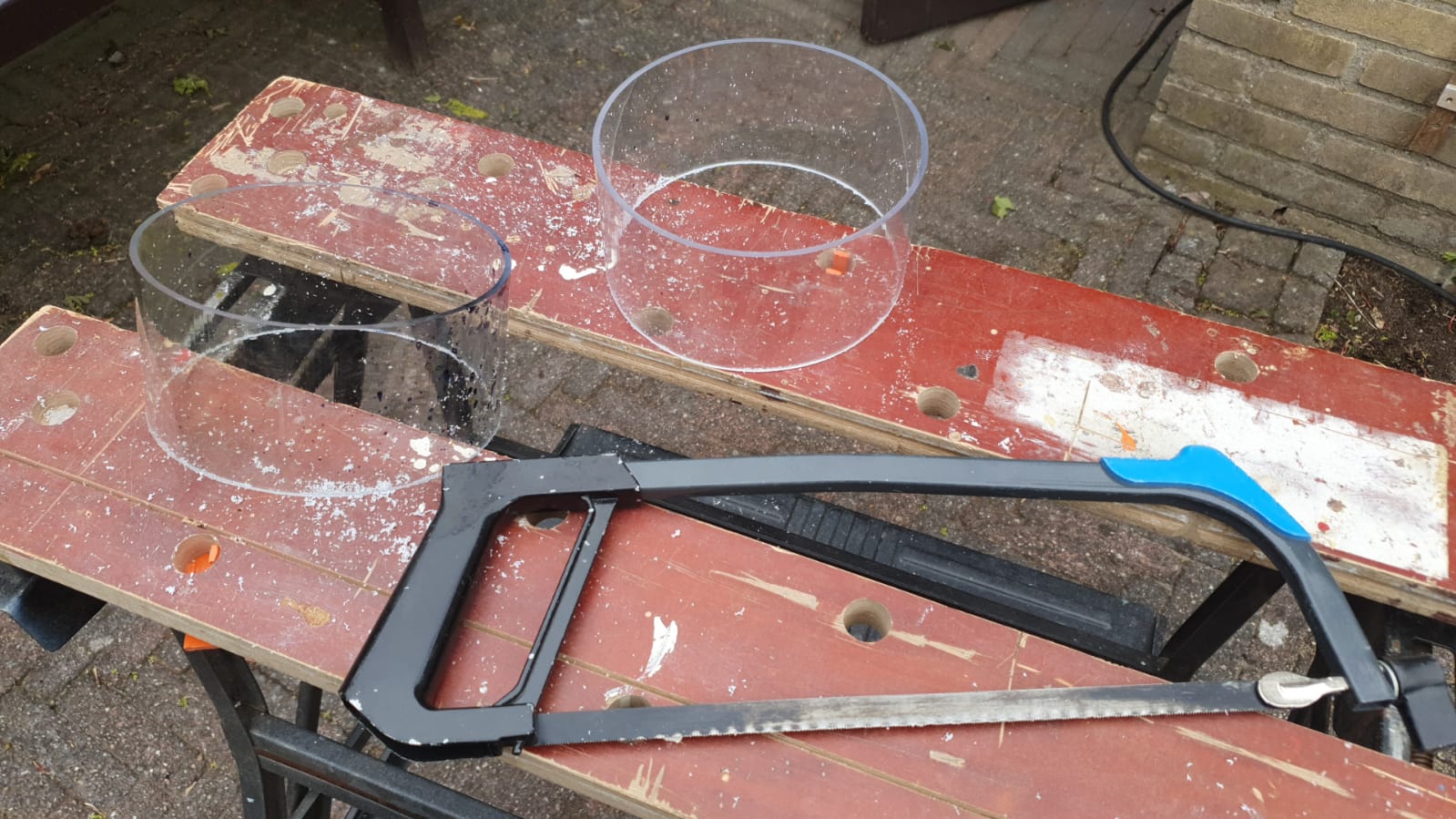 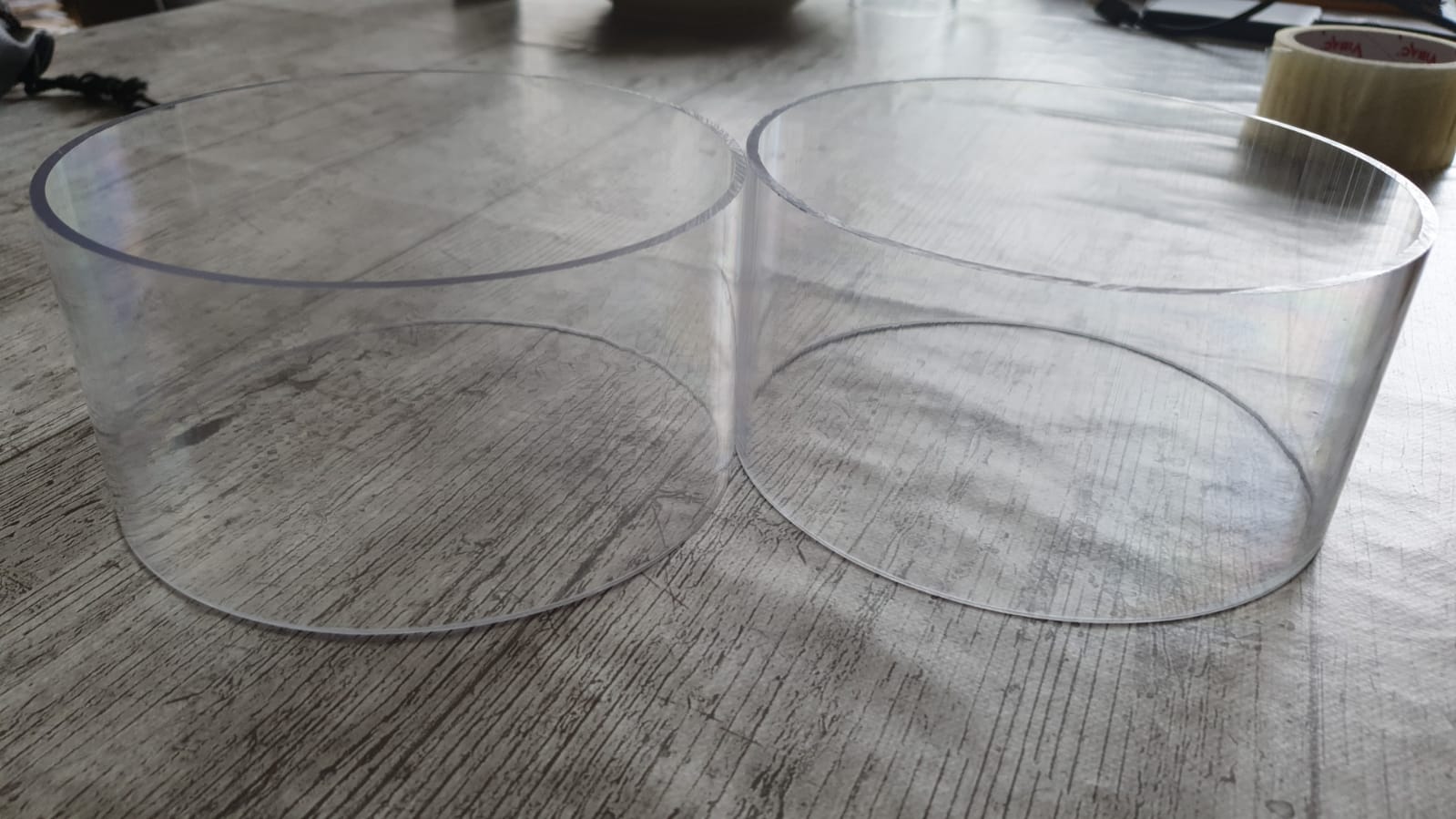 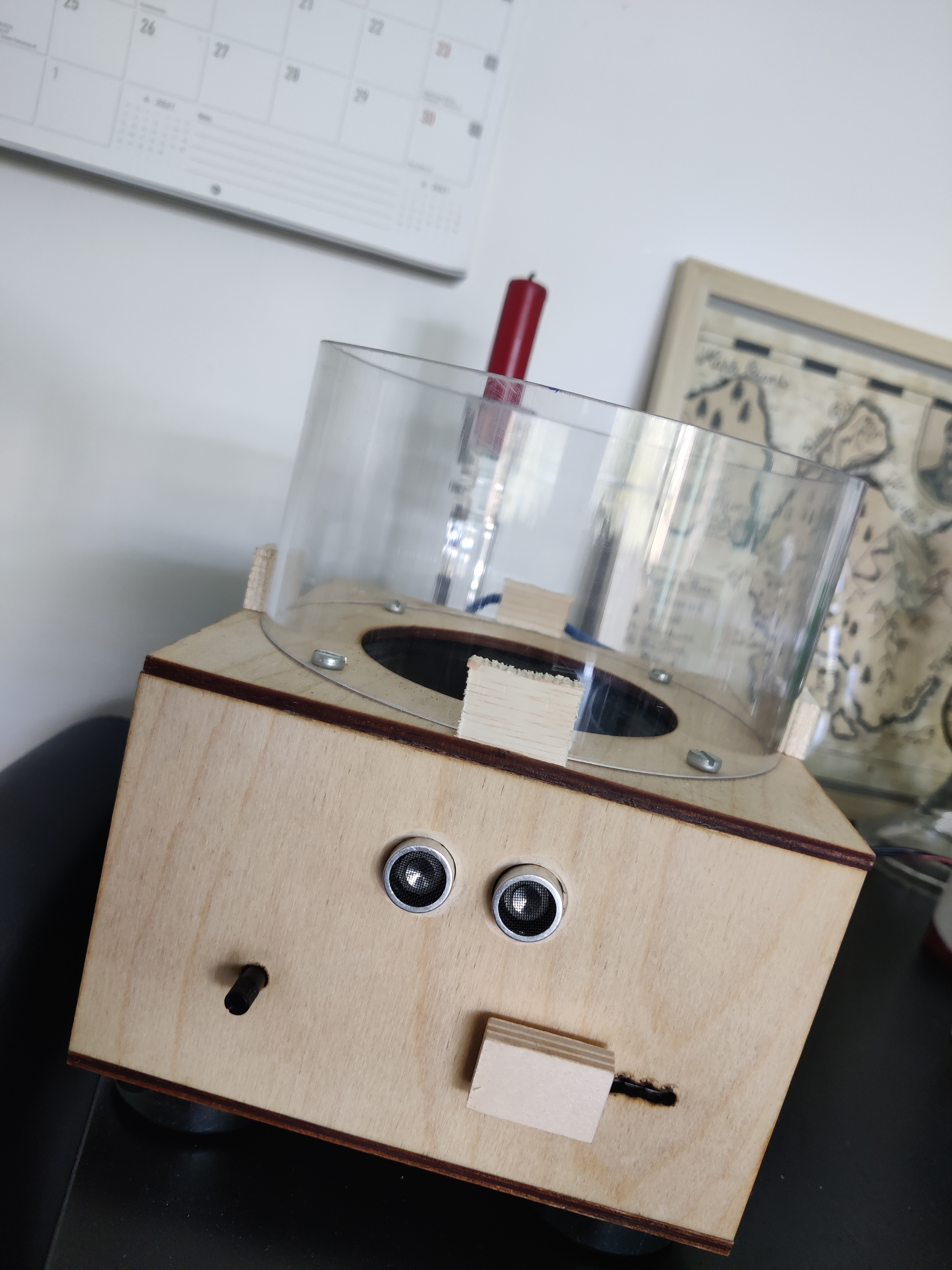 So this is the finished Sonic Illustrations installation! After all this hard work it's definitely time to try and create some illustrations with it!

Well, as it turns out, it wasn't as easy as that. 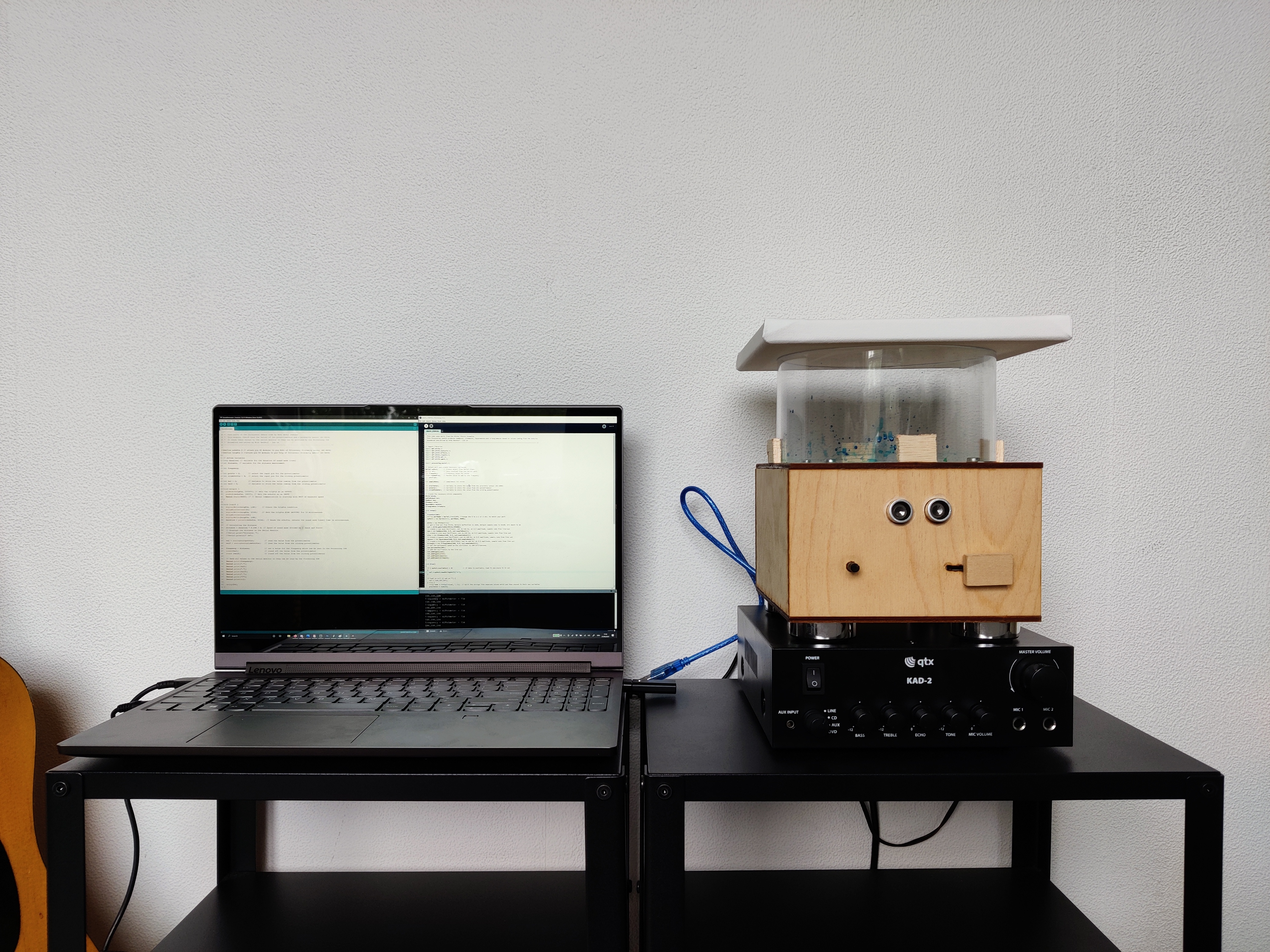 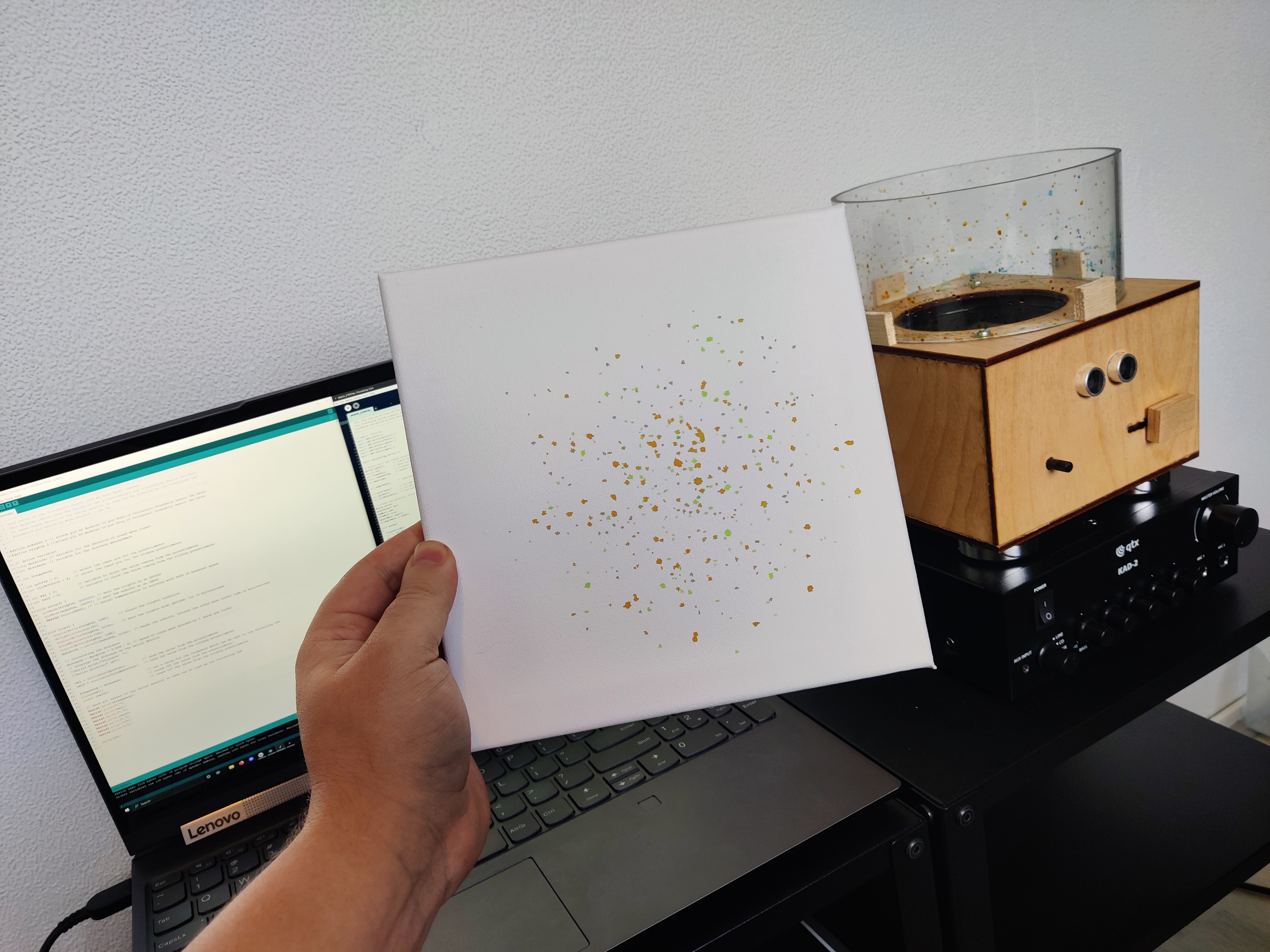 As it turns out, even with the lowered plastic tube, the ecoline would not get splattered high enough to reach the canvas in high enough quantity to create the result I was looking for. After a lot of trying to get it to work I realised I'd have to look for different solutions since this one clearly wasn't going to work the way I wanted it to. 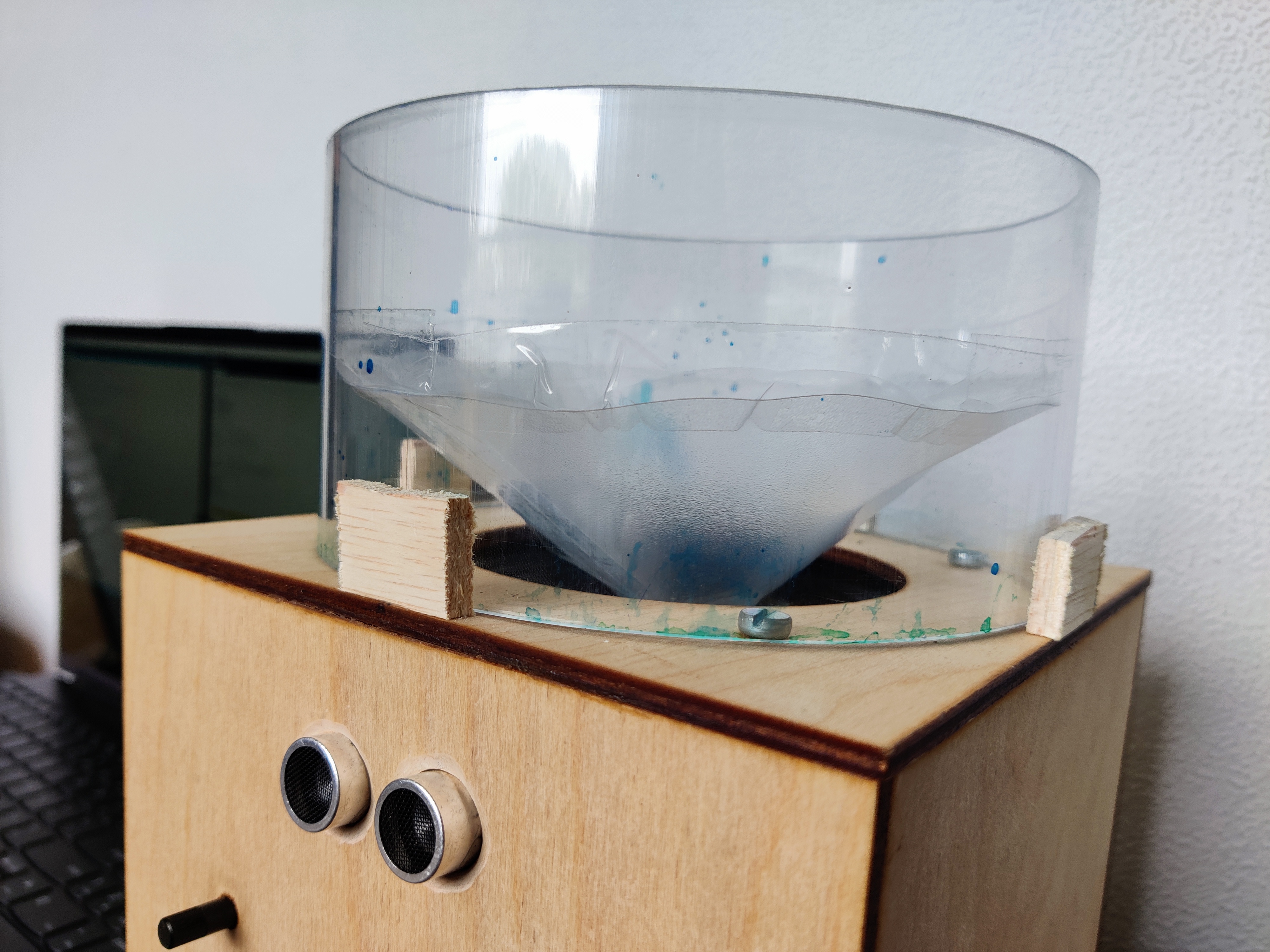 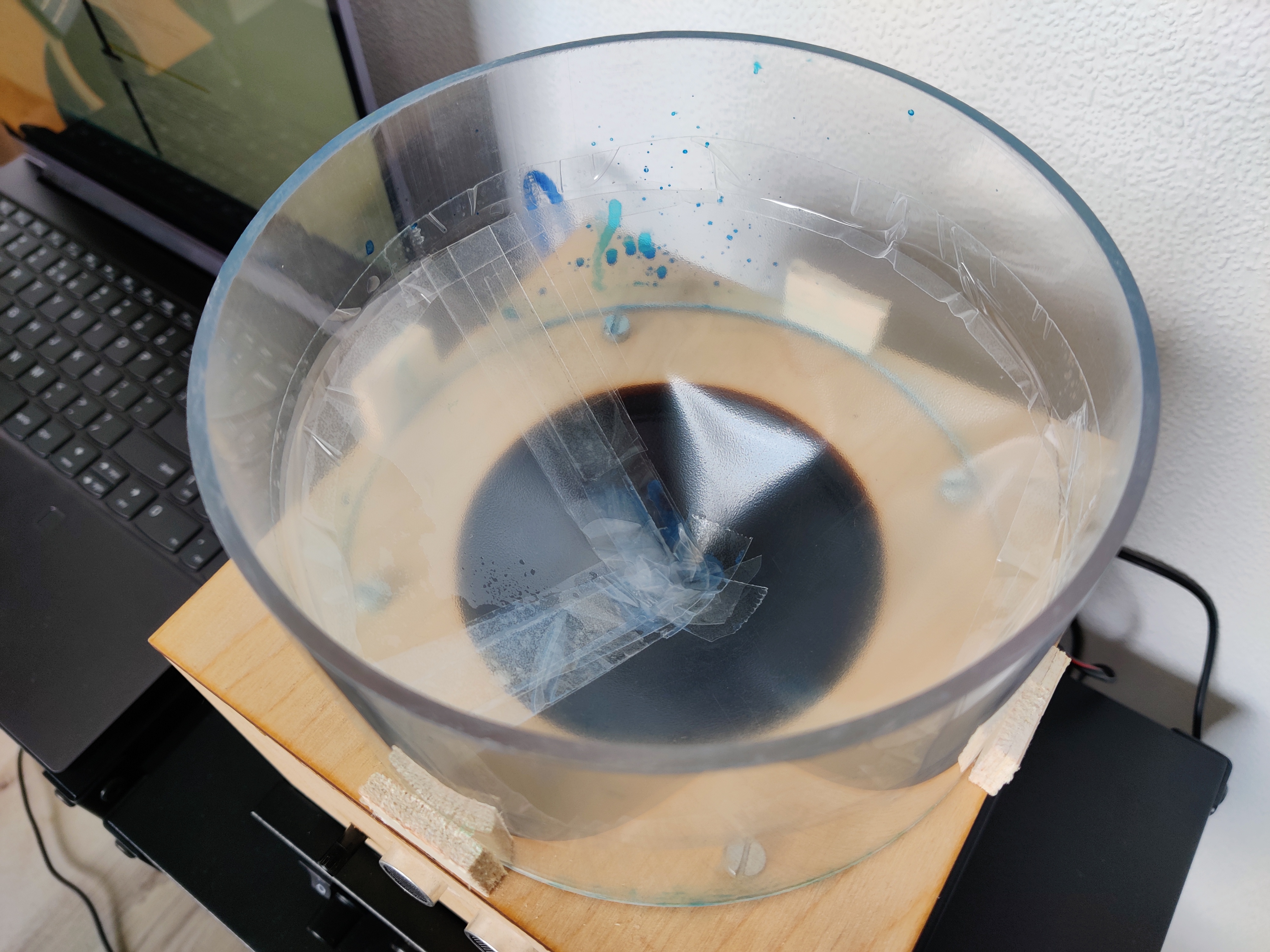 I tried to create a transparant cone from some plastic I had laying around but that did not result in any improvements. The plastic cone proved to be too stiff to transfer the speaker's vibrations onto the ecoline. So in a last-ditch effort I created a much lower circular tube from the same material and tried it that way. 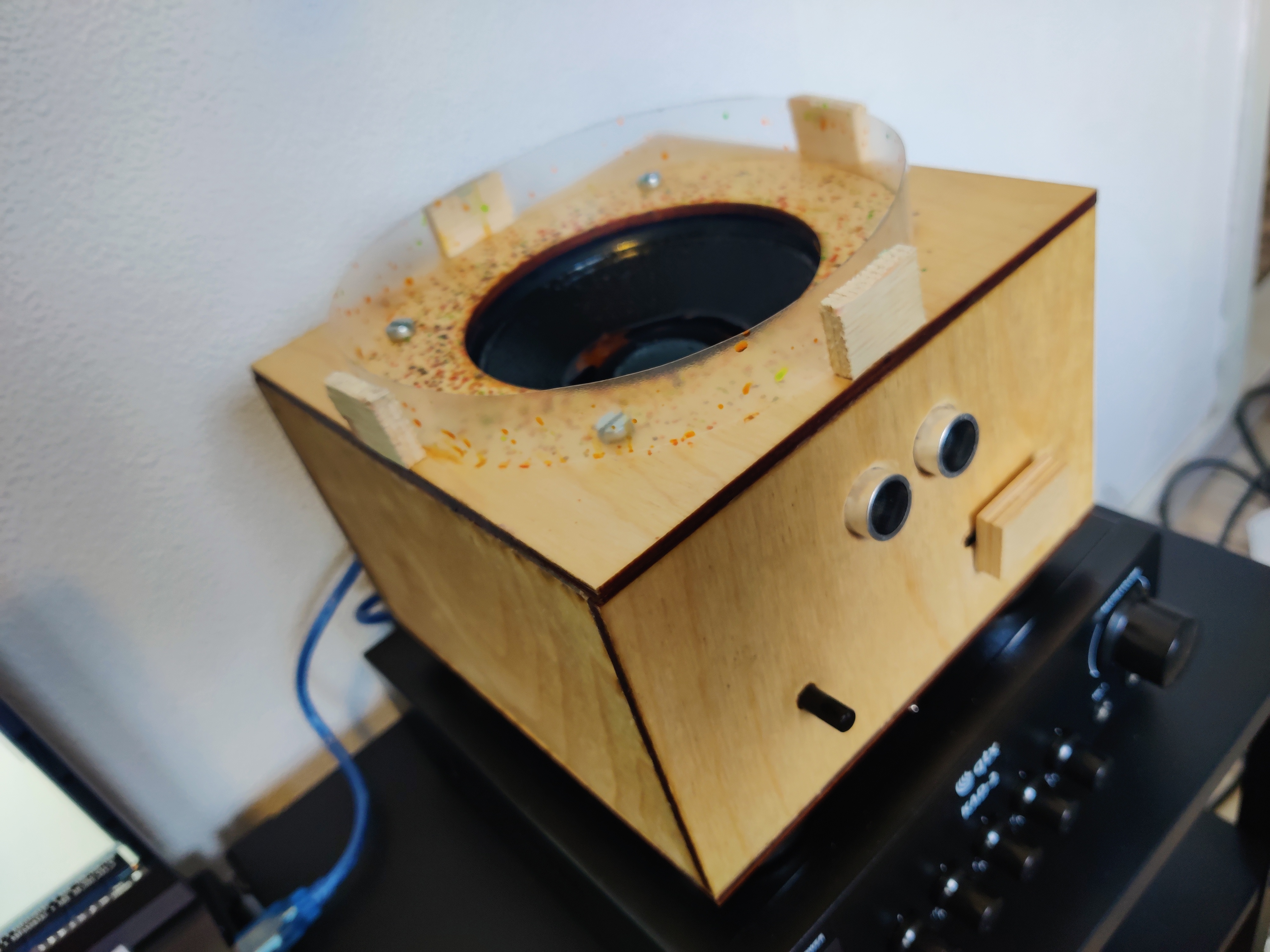 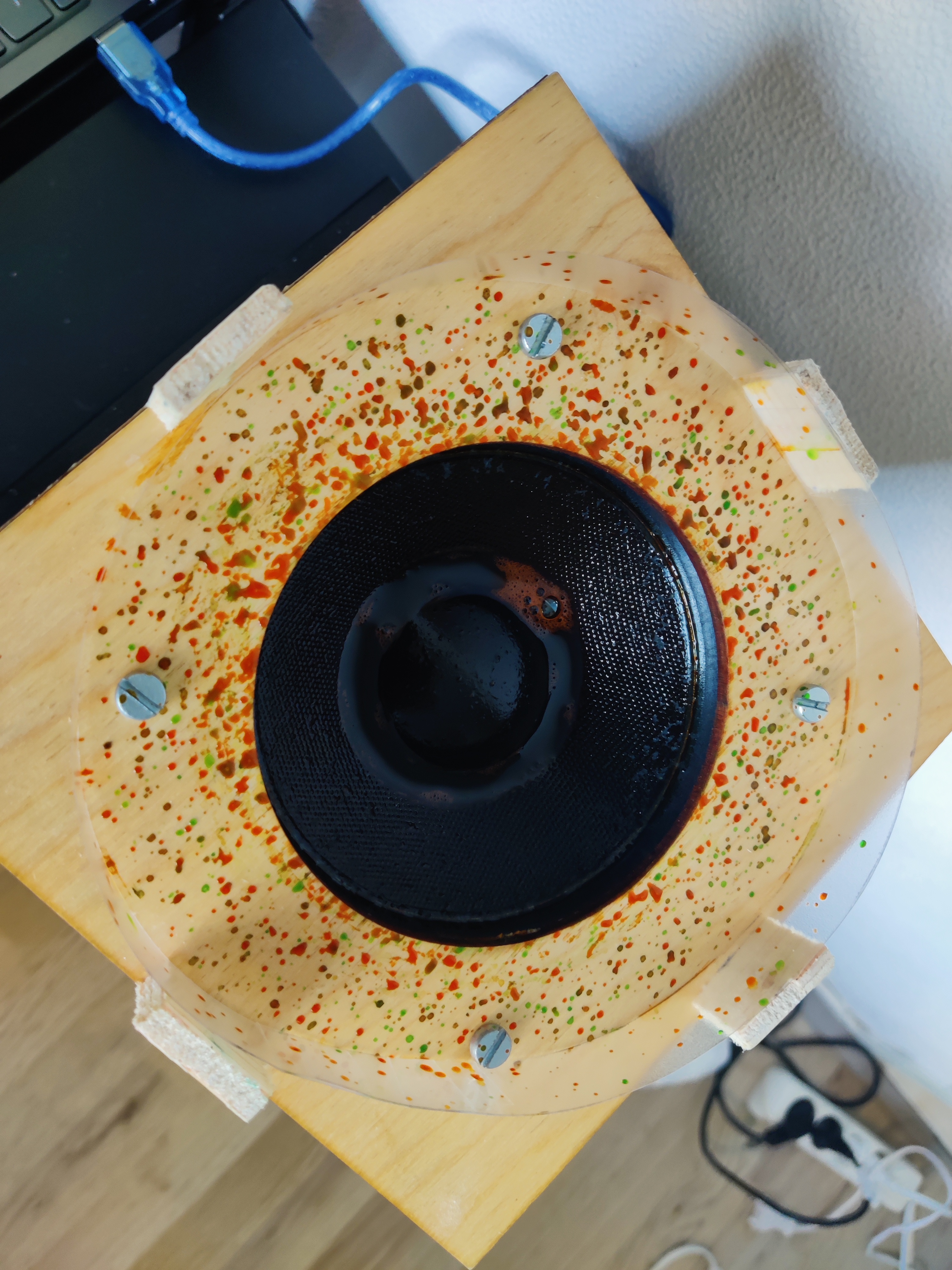 The lower circular tube I made from the plastic material wasn't as visually pleasing but it definitely had a much better result. Due to the lower height of the canvas, a lot more ecoline actually reached it. 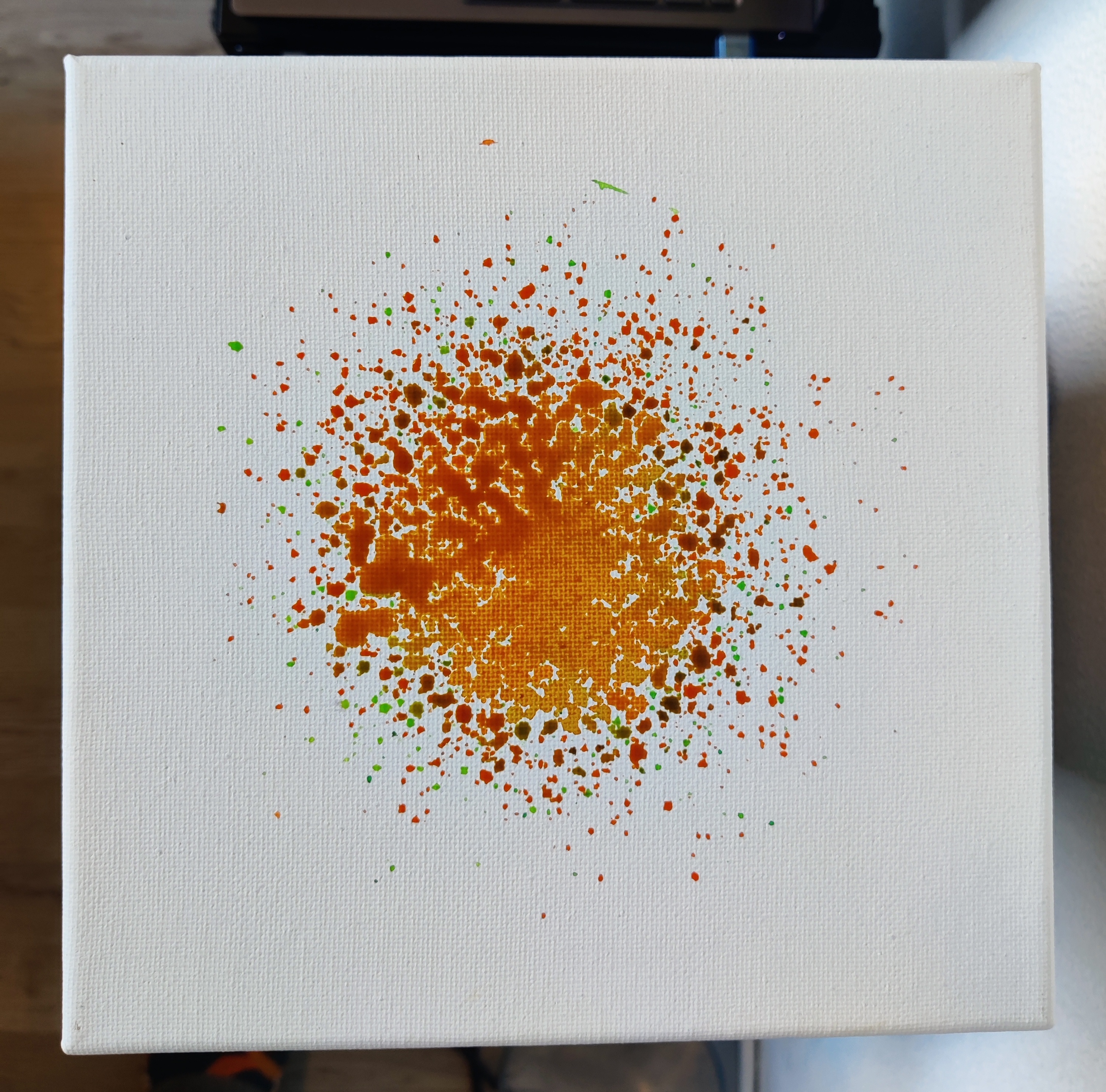 This was the final result of this setup! I'm quite happy with the way this turned out. Now it's up to me to try out different colours, amounts of ecoline, amount of noise etc. In other words; it's time to experiment!

Getting this setup working properly was definitely a struggle. Transfering the vibrations from the speaker onto the ecoline was harder than I thought. The setup I used in the experiment had the canvas laying directly on top of the speaker, thus making sure that all the ecoline stayed inside of the whole setup as well as making it much easier for the ecoline to reach the canvas. Since I wanted it to be more visually pleasing I added the plastic tube between the speaker and the canvas. In the end it was this difference in height that gave me the most trouble. I had to settle with a much lower setup with less of a visually pleasing aesthetic.

Either way, it does work. Sonic Illustrations taught me a lot of new things about both the Arduino + components but it also taught me how to make Processing and the Arduino communicate with each other. This is definitely the biggest lesson for me from this project.